The 3rd inductee into the IYH Fan Hall of Fame 2012 is Songman.

In his short time with IYH, Songman has made quite the mark on the show. His plethora of songs can be heard both on the show as well as on youtube. Songman is loved by many and hated by the rest. But, he is part of the IYH community and experience. Even with harsh criticism the man stays positive and comes back for more. His interaction with OIB has been priceless, and has even gone from the podcast to the Facebook community. Jack wishes he never kills himself, and keeps his mom on speed dial just in case he fears for the worst. He sure loves many women as his #1 favorite of all time he loves to death. And we feel the same way for you, Songman...well at least Jack does.

We are proud to welcome Songman into the IYH Fan Hall of Fame Class of 2012. 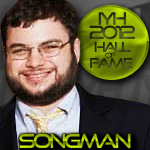