The next inductee into the IYH Fan Hall of Fame 2015 is Dobz.

Originally known as Fat Dobz and dubbed "Fatty Fatty Boom Daddy" Dobz is a regular member of the Headyverse on facebook, the chat and the occasional call in. An always entertaining chatter Dobz adds a lot to the Headyverse. Always very supportive of the show and hosts, he is as Jack would say a good man indeed. Representing the Headyverse at all of the butler conventions in merry ol England Dobz helps spread the Headyverse to the British tea drinking audience. Dobz has helped Jack E. Jones in many ways, and has become his official squire. Dobz' first mission as Squire Dobz was to take over the Jack Pack as the Dobz' Mob. Though he failed, we give him an A for effort. "Dobzing us" has become a phrase in the chat room. For all of the memories and more to come we embrace Dobz to the Hall of Fame!

We are proud to welcome Dobz into the IYH Fan Hall of Fame Class of 2015. 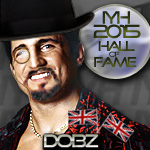