The 4th inductee into the IYH Fan Hall of Fame 2011 is Travis in Denver.

Travis is a long time fan of IYH, who was brought to the Headyverse by fellow Hall of Famer Jason X. Travis has helped keep the Headyverse expanding by bringing in his wife Crystal and teaching their children to be proud members of the Heady Youth. Travis is a regular caller, and even puts up with Jack hitting on his wife weekly on the show. Travis has won many prizes in IYH history, and has even helped keep the site alive by purchasing merchandise from Neal's Sportswear. Travis really showed his personality during the recent videos in the Buckhouse Stampede & Crockett Cup tournament.

We are proud to welcome Travis in Denver into the IYH Fan Hall of Fame Class of 2011. 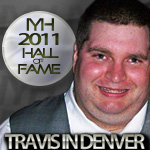